The corset is finished!
Almost. 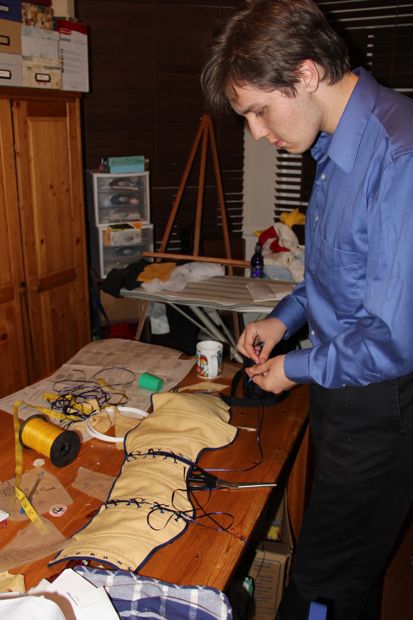 Alex's first collection, practically his first big venture in sewing anything, is finished. He very recently joined his school's Fashion and Design Guild, and now he has completed his first collection. He made a corset, tutored by Natalie, who was also learning as she went! And he made a blouse to go with the corset. Though he was following patterns, he was also adding his signature touches and modifications. In the end, the two pieces were definitely, uniquely, his own. 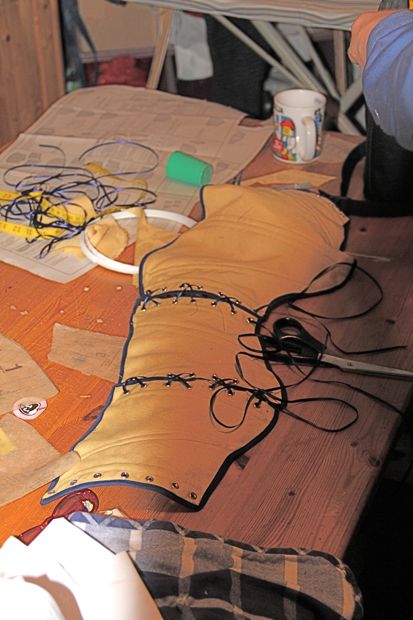 Taking a page from his own art, Alex designed a corset to fit an automaton, or autonomous robot. 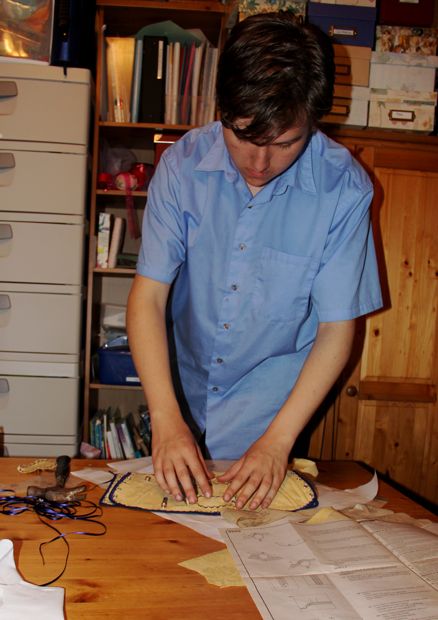 Using eyelets, Alex added reinforced pieces that would serve to lace and hold the worm geared turn key he designed and machined from aluminum. The turn key is designed to pull the laces of the corset, and was made to sit on the back of the corset giving the model the appearance of an automaton, or wind up figure. Very SteamPunk. 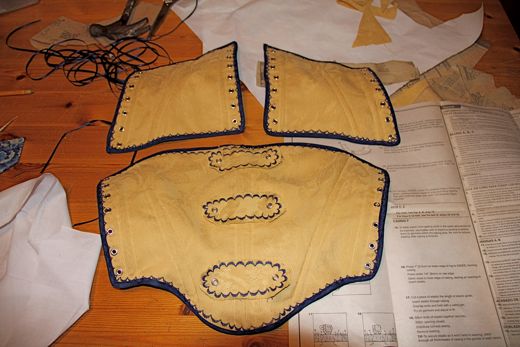 It was a relief to see all the parts complete. It would have been a bigger relief if there was a model to try it on, or time to test the key with the laces... but time was running out. 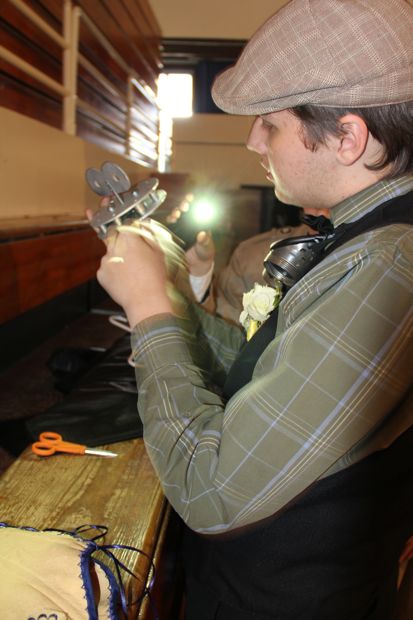 Alex was still machining parts during his lunch break. Eli had to shine some light on the subject, as everyone was scrambling to be ready for the fashion show. 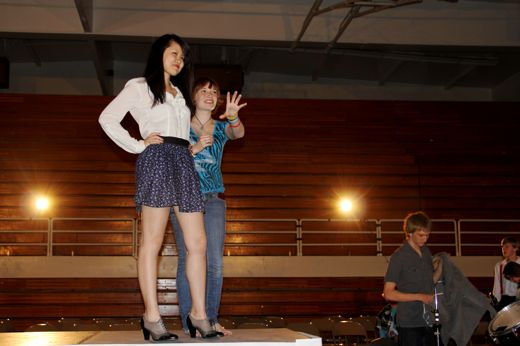 With the band setting up, Tatiana doing sound and video checks, and everyone contributing in some way, Lonnie took the time to teach each model how to walk the runway. Ticket sales, food and drinks, even the raffle proceeds were going to raise money for a charity that provides drinking water to countries in Africa. 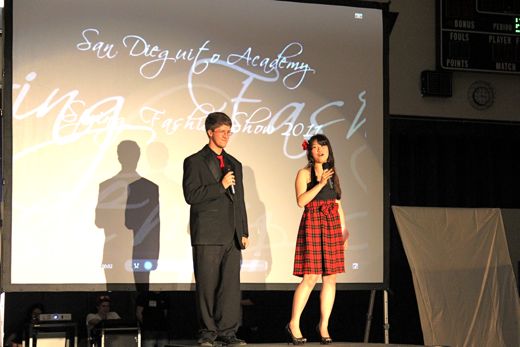 An emcee, the very funny Wilson, and the event organizer, club president and talented designer, Claire. I love her dress. 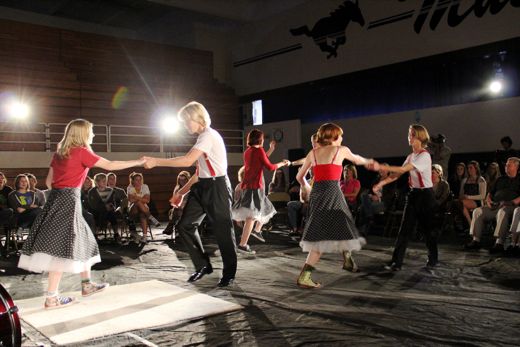 Six swing dancers, and I recognize five of them from FIRST 2102 Team Paradox! Robotics club members are talented, dedicated, and enjoy a wide range of activities. 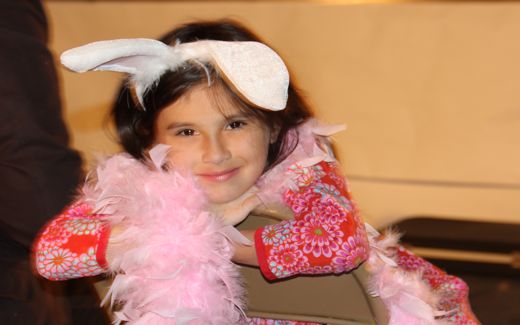 I think Maria felt right at home among all the familiar faces at her brother's school. And she certainly looked like a mini-fashionista in her boa, and home-sewn gown. 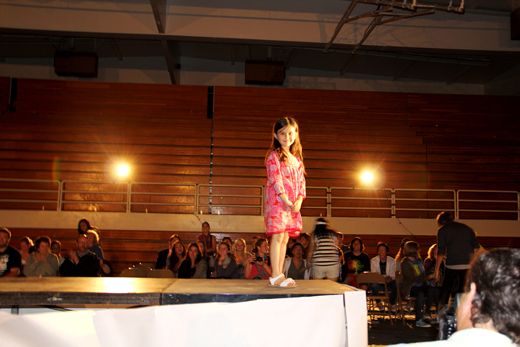 In fact she even had a moment in the spotlight, when audience members were invited to walk the runway. Her dress is a couple of seasons old, but it is an original design, thank you very much! 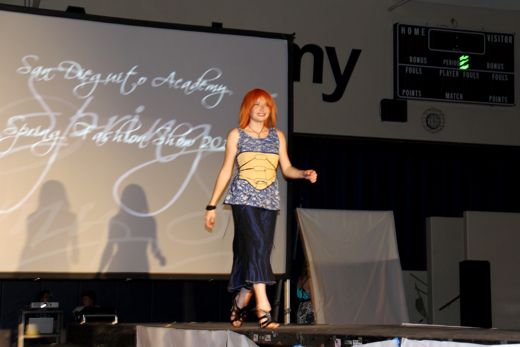 One. Only one, barely acceptable picture. I am still learning how to use the new camera, and the lighting was a challenge, not to mention those fast walking super models. Okay... enough with the excuses. Lonnie modeled Alex's designs. Then, like the other designers, he walked the runway too, which was Maria's favorite moment, mine too. He was the only male designer in the guild. He is already working on improvements and upgrades for his concept... something he hopes to unveil when we are at Maker Faire!

Not to end a sad note, but I really am bummed about the quality of the pictures I took. I would have loved to include more images from Claire's, and Suki's collections. I really wanted to include pictures of Tatiana at the control board, and Suki in the black formal gown, which she was totally rocking. Hopefully, the event was successful in achieving Claire's ultimate goal: bringing fresh, safe drinking water to places where clean water is far too rare.
Posted by Natalie, the Chickenblogger at 1:14 PM

I know it's a shame when the pictures don't come out (or you run out of batteries, my problem!) but these are great and the corset looks brilliant!! I love Maria on the catwalk - a natural and her outfit is stunning.
Ax